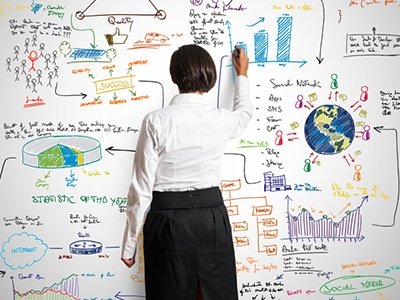 How many marketers use email in their campaigns? In 2015, 93% rated email as ‘important’ or ‘very important’ to achieve their objectives, an increase from 89% just 3 years ago. But interestingly, direct mail and telemarketing are two of the channels that are considered to work well with email marketing*. Used together, the channels can deliver more than the sum of their parts.

Why? Because of the nurturing effect.

Send a prospect a package and they’ll either open it… or not. But follow it up with an email and they’ll remember it better. Reading about it on social media will make them think about it again. Finish with a personal phone call and they’ll be ready to take action. That’s what cross-channel marketing delivers – action uplift. The uplift stems from using additional channels around the “core” to eke out every last percentage point of response. Here’s a suggested campaign plan that uses the strengths of each.

Boxes or envelopes don’t always close a sale, but they get opened at far greater rates than email – particularly greater than the “scattershot” campaigns all-too-prevalent in today’s marketing. The reason isn’t hard to see: you’ve incurred a cost.

A physical box with a stamp on it has cost its sender money.

Traditional mail lets its recipient know you’re serious about contacting them. That’s why direct marketing lists tend to be cleaner than email lists: instead of a cloud of returned electrons, a package returned to sender costs serious cash. That’s why we suggest you put direct mail at the core of your next campaign. A clean list to get it on the right desk, a campaign idea to interest your contact in opening it and a targeted offer to start off the journey down the sales funnel. But it doesn’t end there.

Adding the buzz, with social media

Social media can do two things well. First, it can create buzz: an audience “making it their own” can spread the word further and cheaper than any broadcast medium. Second, it can extend the life of a campaign, by keeping it alive long after the envelope hits the desk. (Or – if you get it wrong, as brand giant Coca-Cola recently did – cause offence to your core customers.)

You can use social media in many ways, but make sure it’s integrated.

How about putting a #hashtag on the buckslip (that piece of paper that falls out of the envelope first) and prompting your recipient to check Twitter? When they do, you Tweet back with an added offer. (Known as “box and key” marketing. Or tell them the value of their offer will double if they send a blank email to you before midnight (letting you gather their email address.) All those light touches across social media add up to an increased chance of response.

While email campaigns work, the channel can also be used as a nudge: regular reminders that an offer period is expiring or that the campaign is moving fast.

A series of nudges over time can increase the response rate of the core campaign dramatically.

Personal contact by phone is a pricey channel and we suggest you use it last to get the largest (and most profitable) chunk of your audience engaged in your campaign.

What is that most profitable chunk? It’s the people who don’t have time to respond immediately.

In B2B it’s the most senior people, the largest budget holders, those with a great deal else on their minds. The most effective sales method understands your customers’ needs and speaks in a human voice… both ideally suited to telemarketing.

Of course, cross-channel marketing needs one overarching tactic: data. Don’t ever use a separate “email database” or “address database” and call it a cross-channel campaign. (61% of marketers say their business has been damaged by dysfunctional silos.)

The point with using multiple channels is not to “overlap”. It’s to cross-connect, make all the parts of your campaign look like an integrated whole.

Julie is one of the founder Directors of Marketscan and has a healthy obsession with B2B data, strongly believing that there is no substitute for quality.

Please use the form to send us your enquiry and someone from Marketscan will be in touch shortly. Our offices are open Monday to Thursday 8.30am to 5.30pm and Friday 8.30am to 5.00pm. You can also contact us directly on the details below: